<![endif]-->
Home
AEPE - Association of Retail Traders and Shopkeepers of Venice is proud to present: Venice and the restaurants of excellent cooking Food Culture

Trattoria Altanella has been managed for four generations by the Stradella family. It started up in 1889 when Nane, the great-grandfather, opened an inn in Calle delle Erbe, which was later called Altanella, due to its nice garden on the water.

You can enjoy classic dishes of Venetian cuisine, which have been made more special over the years by the family’s recipes, such as: Grandma Irma’s gnocchi with cuttlefish ink, mamma Paola’s “Nane-style” filet of John Dory and Stefano’s “Irma-style” anglerfish. For the moment, Stefano is the last cook in the family.

The restaurant has always been a port of call for personalities from the fields of art and literature and from international politics, including Gabriele D’Annunzio, who before leaving for the famous “Torpedoing at Bakar” dined here with his companions of adventure, also Ernest Hemingway, Renato Guttuso and Luigi Nono.

Today, it is still frequented by people and celebrities who appreciate its genuine atmosphere, which is typically Venetian and kept up with love and passion by Gianni and Roberto. 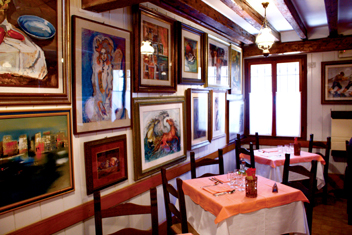 Anglerfish cooked with cherry tomatoes and olives Go to recipe > >